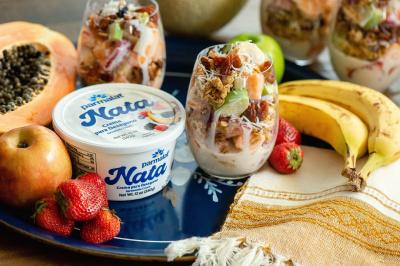 A bionico is a snack salad made with papaya, cantaloupe, apple, strawberries and banana. The fruit is mixed in a combination of creams, which include sour cream, sweetened condensed milk and at times, cottage cheese. It is called a bionico, meaning “bionic” because it is considered an energy snack with so much fruit included. Because I’ve gotten to know Parmalat Nata Crema Para Desayuno very well. This delicious nata was a perfect candidate to be part of the bionico mix. The result is a creamier version than the original. The cream turned out silky, rich and flavorful, and coats the fruit really well.

Serve fruit in individual containers and top with granola, pecans, raisins and coconut.

Products related to this recipe